After Paris, I flew to Athens to spend time with my dear friend, Olivia.  I met Olivia when she retired from the United Nations and I became her replacement in the Office of the Spokesperson for the Secretary-General.  I found out, after speaking with people and especially with the UN Correspondents, that I had big shoes to fill.  We became friends instantly, a very strong connection of the heart.  Olivia is a very sensitive and kind human being who returned to Greece to be with her daughters, but comes back to New York from time to time working at the United Nations on special projects.

The night before I flew to Athens, I happened to see pictures on Facebook of my friends, Paul & Agnes,  with the Acropolis in the background.  I immediately sent a message to say that I would be Athens the next day and we arranged to meet during my stay.  When we let life take its course, some kind of magic happens and this proved to be true during my trip. I met Paul & Agnes a long time ago in the 1980’s,  when I was living in Belgium and we have remained friends since then.  They live in England and travel the world for both business and leisure.

Before I left, I connected with Lindsay who also used to work in the Office of the Spokesperson for a short while and after which she left to work with UNRWA where she fell in love with Alaa who was also working there at the time. We arranged to meet during my stay together with Olivia. It’s such an uplifting energy being around people who truly love each other, regardless of the hurdles that they may have encountered to be together.

When I arrived at Olivia’s place, I found myself in a beautiful and warm home, a huge balcony with an awesome view of Athens where we spent most of our evenings.  We had so much to discuss, to share our experiences in general and at the United Nations, which reminded me that it used to be my anchor and that I was now drifting to some unknown destination.  I never thought that retiring from the UN would be so painful as I felt so lost, almost like leaving a marriage, which did become my anchor, as well as my art, when my marriage broke up. Fortunately, my art is keeping me anchored as well as my family of friends.

As it is often the case, the pull of the past is quite strong, hence the sense of being lost when life takes on a different course and I am quite sure that I am not the only who feels that way.  Working at the United Nations is, in my humble view, a privilege which unfortunately we often take for granted.  Most importantly, it’s the people we meet along the way.

Spending time in someone’s home is also a privilege, opening our home to a friend is also about opening the heart, and with Olivia’s generous heart I was in heaven.  She showed me how to make a real Greek salad which is now part of my cooking.  However, eating the fresh produce from Greece is not quite the same.  While staying there, I also had the pleasure of meeting her beautiful daughter, Maria Teresa, whose kind and gentle disposition contributed to make a very special family environment.

While in Athens, I also recalled memories of my trip with my friend, Caroline, while we both lived in Belgium.  We drove with our respective partners from Antwerp to Athens and back in a flash.  It was a long time ago, in 1982 and we were much younger then.  After having lost touch for a great many years, we reconnected when I returned to Canada as we are now living in the same area.  Once again, life has strange and magical ways to bring people together and so much to be grateful for. 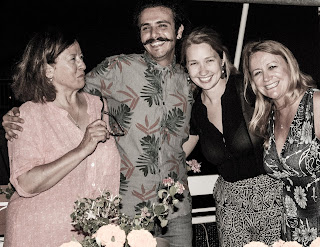 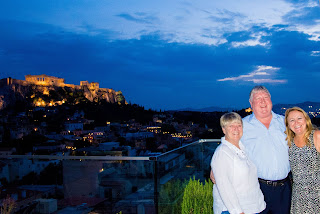 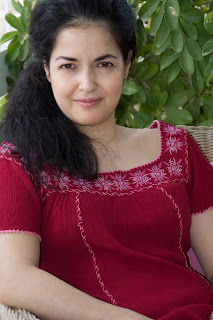 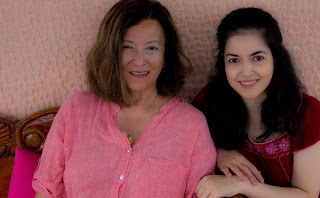 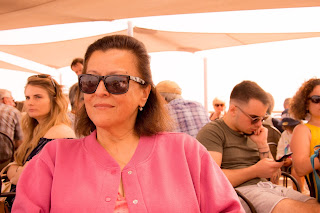 Olivia on the cruise to the Island

With Olivia on the cruise


Posted by Marlene Luce Tremblay at 7:43 AM