My journey started in Paris on May 2nd where I met up with my friends from New York, Afaf and Fabio.  We rented an apartment together in the heart of the historical Latin Quarter.  Before their arrival, I was on my own in Paris after having had the worst exhibition opening ever.  Although the gallery was situated in the heart of the art world on rue Dauphine in Saint-Germain-Des-Prés, it seems that few people were invited, if any at all.  The artist way is not always easy as we often trust that galleries will do their utmost to show and promote our work, especially when coming from afar. But it was not so in this case.

However, thanks to my friends, Louise & Sophie, whose undeniable support and friendship brought me comfort.  Louise & Sophie are long-time friends from when I first worked at the United Nations in 1989 and have remained friends ever since then.  Sophie and her husband, Philippe, invited me for dinner and every time I come to Paris, I have the chance to spend some time with them and have done so over the years, in both New York and Paris.  Then afterward,  I met up with Louise at Brasserie de l’Isle Saint-Louis. We spent the whole afternoon discussing about life and the precious moments we spent together in New York.  It was real time together for neither of us looked at our mobile nor at our watch as if we were totally oblivious of time.

When we parted, I returned to being on my own, capturing images of the beautiful historical sites and life in Paris.  I spent a great many afternoons at Café des Deux Magots watching people, where Simone de Beauvoir and Jean-Paul Sartre used to meet.  Simone de Beauvoir is one of my most admired French writer who was part of the Existentialism movement, together with Jean-Paul Sartre.  She wrote a book ‘The Second Sex’ which remains to this day a classic feminist literature.

Then at Les Deux Magots, I also had a brief moment with my dear friend, Soraya, and her beautiful niece, Nesrine & her daughter,  before she left for some other destination.  Soraya is always from one flight to another between Istanbul, Algiers, Paris or somewhere else.  I could never understand why Soraya doesn’t like living in Paris, however, it became clear to me that being in Paris by myself is kind of lonely.  Unlike New York where people, even strangers, mingle and exchange because we all come from somewhere else.

All the while I was on my own, many thoughts came to mind and at night, so many dreams about my mother and my father as if the departed and most important people in my family were still with me. Maybe they were in some ways and that made me reflect a great deal about death and how precious life is and how much I love life.

Other memories came to mind about my mother and I in Paris while I was married.  I went back to the place where we stayed at Relais Christine in Saint-Germain and I couldn’t hold my tears back because it seem that when she was there, I couldn’t even imagine that someday she would no longer be with me.  How could I imagine for we often forget that life has an expiry date, when the batteries go out it’s over.  Hence the importance to show love to those who matter most in our lives.

As the song goes: ‘Loneliness comes and goes’ and when my friends, Afaf & Fabio, arrived in Paris I was filled with joy for I knew that those moments spent together would be memories for the rest of my life.

Indeed when Afaf and Fabio came, it was as if time or distances did not matter for we are friends and every minute, every hour, every day we had something to laugh about, just being together.  How wonderful is that and this is so precious to me.  I met Afaf at an Italian event for organized by my friend, Stefano Vaccara, the founder of this Italian online magazine, La Voce di New York, at the Italian Cultural Centre in New York.  The connection with Afaf was immediate and thereafter came her friend, Fabio, who among other friends of her group also became my friends.  This is what New York is all about, people! 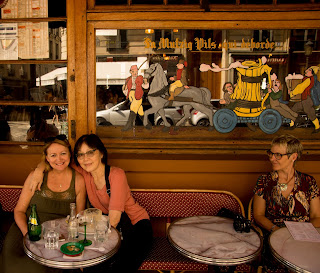 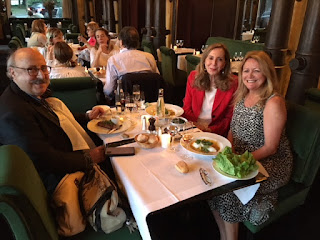 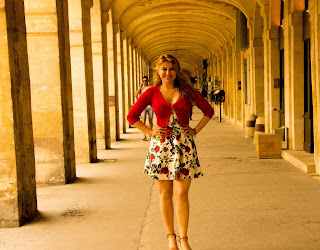 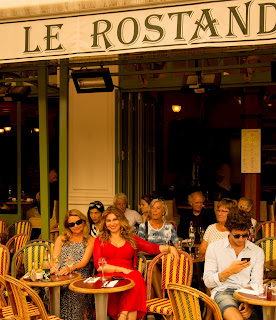 With Afaf at Le Rostand 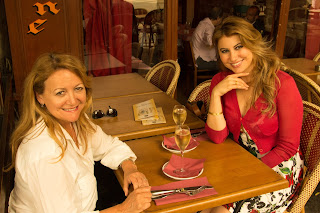 With Afaf at a café near The Pantheon 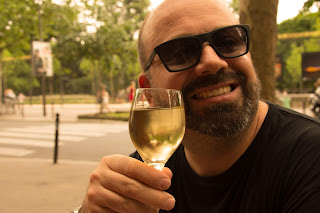 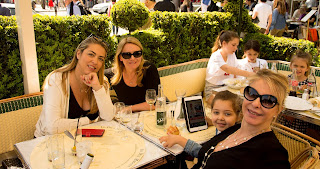 With Soraya and Nesrine at Les Deux Magots
Posted by Marlene Luce Tremblay at 9:26 PM